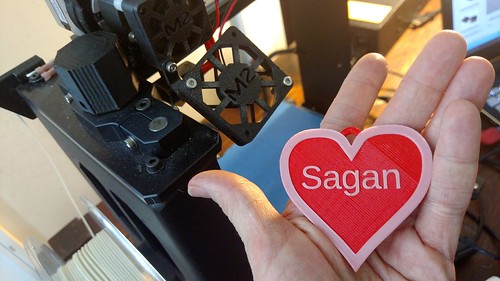 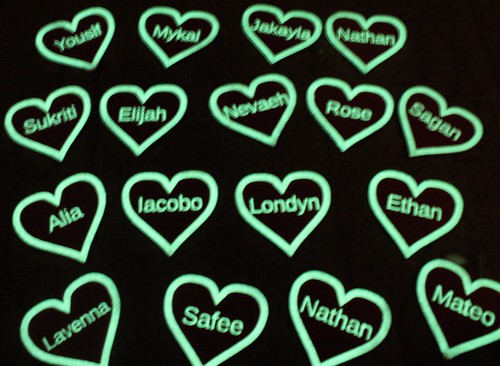 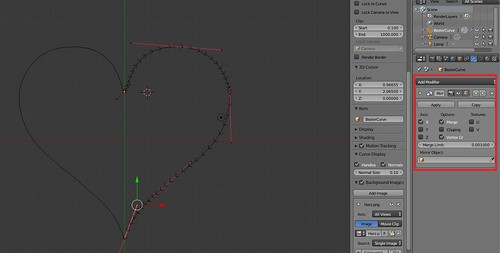 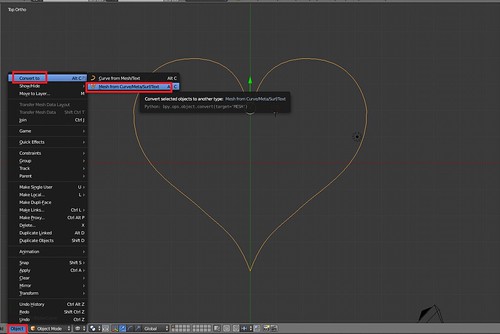 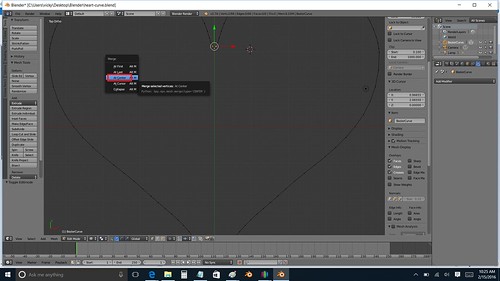 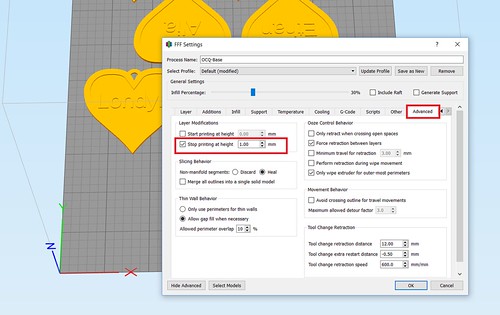 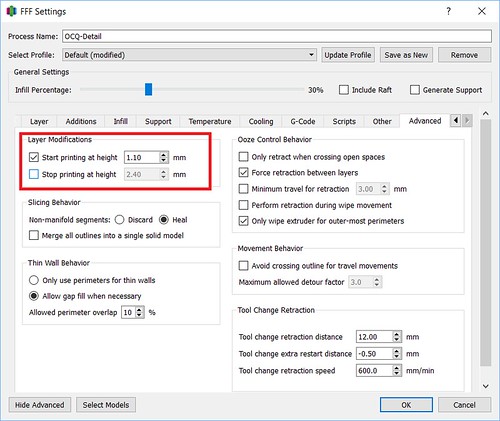 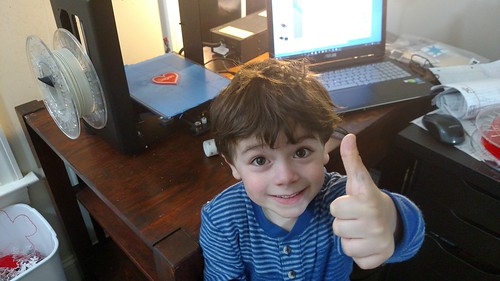 Victory with the Monarch Butterfly
As I mentioned yesterday, I was having some trouble adapting the Public Domain Monarch Butterfly model by Liz Havlin. Although I have been 3D modeling for about 18 months, I was having some trouble achieving what I wanted– I wanted the holes of the butterfly to not be holes. I wanted the sections I wanted to be orange to be 2mm high and the sections I wanted to be white to be 2.3 mm high.
Unfortunately, I was introducing all sorts of manifold issues along the way. One day, I may look back on this and laugh at myself and my “silly ways”, but for now here’s what I ended up doing that actually worked for me.

I was able to easily make a solid butterfly that I extruded up to 2mm high– so I had my orange all set. For the white, I:

The colors are in the same height and order as the Baltimore Oriole (Orange – 2mm, White 0.3mm, Black 0.4mm), so I can print butterflies and orioles together.

Again, with future modeling knowledge I may look back and scoff at my approach. Nonetheless, I have my butterfly… and he’s beautiful! 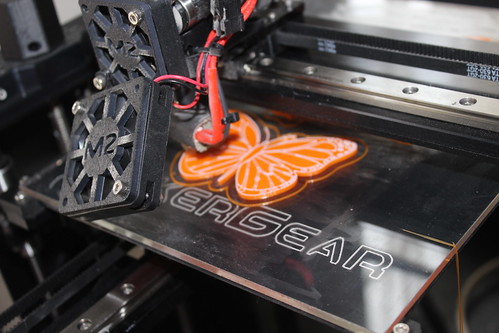 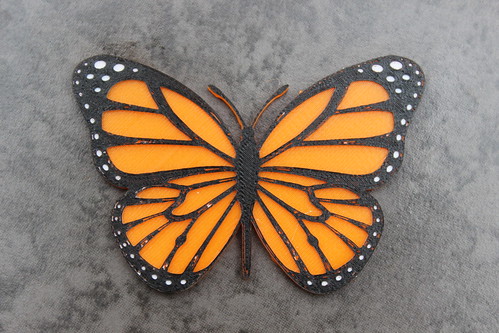 Glowing Cthulhu Coaster
Another project I tackled was a lot easier. I have a little Cthulhu cutout I modelled for my “Glowing Cthulhu Pumpkin” on Shapeways.

In the case of the pumpkin, an LED inside provides the light. I decided to see what ColorFabb’s GlowFill could do. I went ahead and took that same cut out I drew and modelled and carved it out of a small beveled cube to make a coaster. I printed the first 2mm in GlowFill and then the top in a solid color. I am pleased with the result. Not only does Cthulhu glow, but the border around the coaster glows as well. A win.

One of the things I started designing this summer was for my cousin’s wedding. Like me, he is a computer programmer and like my husband and I, his nuptials also celebrated geek culture. Need proof? Final Fantasy was part of his wedding music and he wore Star Wars crocs during the ceremony.

I had tossed around numerous projects. His wedding was in held in The National Aviary. I love “Hearts in Nature” and have seen stunning photographs of two swans making a heart. It seemed like a perfect thing. I pulled up my Blender and started modeling my swans. My process was very similar to what you would find in
Jjannaway3D’s Modeling A Velociraptor in Blender Series. 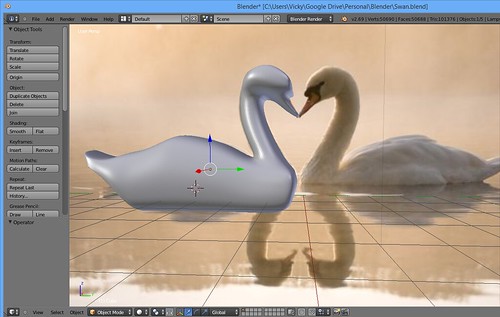 And then… I had a tough question… “Okay, now what do I make out of these swans?” Napkin rings (and the swans did look great curved)? Napkin holder? Hook for oven mitts?

Then I thought, “Oh, he’s into computers, how about I make them into a USB/Sandisk holder.” But then I closed my eyes and really tried to picture my cousin with these swans on his desk. I just couldn’t see it. I loved the swans– I was happy with where they were going, but they no longer seemed to be a good fit.

What *did* seem to be a good fit was a Möbius Strip. And how cool would that be? A Möbius Strip USB holder! *I* want one! My process of modelling the strip itself was very similar to John Malcolm’s Modeling a Mobius Strip Pendant In Blender 2.73. My cross section was a little more stylized (instead of a straight square). After I applied the Bend Simple Distort, I made placeholder cubes for my USB slots (I did that afterwards as I wanted them to retain their measurements and not get distorted during the bend) and voila! I had my model!!!

All along I intended this to be a Shapeways order, but I decided to give it a go on the MakerGear M2. I printed with 0.25 layers and 30% infill in my fabulous new Mint Turquoise Filament from ColorFabb (via PrintedSolid).

Six hours later, I had my print.

I was really digging the print lines on the top. I thought they were neat and added an additional pattern to the mix.

Holy crap, I thought, Maybe this isn’t a Shapeways order! 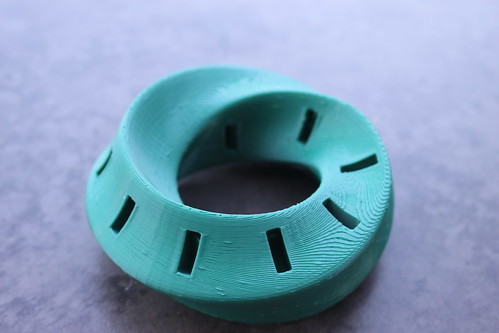 Yikes— Maybe it *is* a Shapeways order 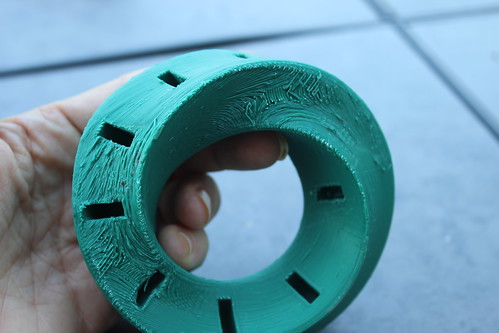 Some quick sanding with 120 grit paper, however, changed my mind completely. I didn’t even get to the 220 or 400 grit. After just that first sanding, my husband and I had to concentrate to figure out which was the top and which was the bottom. AMAZING.

“Where are the ‘after’ pictures,” you may ask. “Document your claim!” You may say.

Well, there aren’t any.

I let my kids play with it… outside…in the yard… where there is all this green shrubbery.

They lost it. Three adults scoured the yard and that Mint Turquoise filament has done an excellent job of concealing itself. Interrogations of the two year old and the four year old, “Do you know where Mommy’s green toy is?” was just as much of a dead end. I suspect it’ll be winter before I find it again.

A reprint is in my future (an advantage of 3D printing– you can always print another one). Regarding the reprint, ColorFabb has an amusing suggestion:

@TGAW Ha ha maybe next print you can make with glowFill? Easier find!

Buy My Designs!
My Etsy Shop