M2 Lubrication
Today I did something scary (for me). My comfort level is more in the modeling and the software side, but the MakerGear M2 was due for some monthly maintenance. According to the documentation I received with the printer, I needed to:

Clean the X and Y linear rails, and the Z leadscrew, of grease, then apply a fresh coat to each – a dot of white lithium grease in each of the long grooves on the X and Y rails, and a dot in four consecutive troughs of the Z leadscrew; once applied, move that axis through its full travel multiple times to spread the grease.

Okay. So first step. I needed to confirm what I thought was the X and Y rails and the Z leadscrew was accurate. With that, I did some poking in the M2 Assembly Instructions. My conclusion seemed accurate (I’m happy to consider evidence to the contrary). 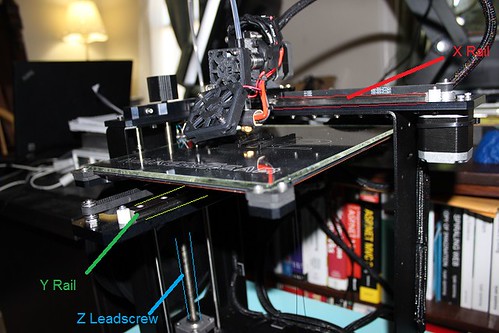 The M2 What’s in the Box manual that shipped with my printer helpfully had pictures of the Lithium Grease and the Applicator, so I knew exactly what supplies to use. 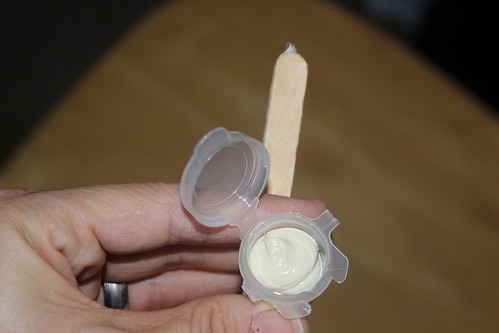 I did my dabbing.

Then I opened my Simplify3D, went to Tools->Machine Control Panel and then clicked on the Jog Controls tab. I used the various X, Y, and Z movements to move the printer around to spread the grease. 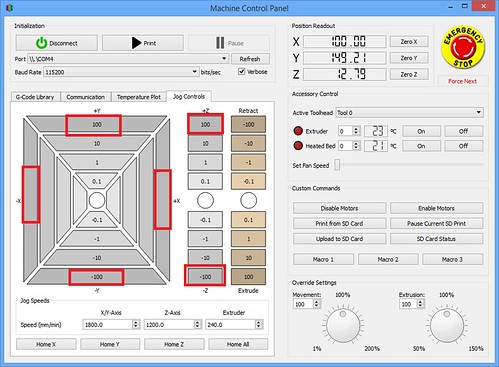 It turned out to be pretty easy and not very scary at all.

Cardinal Progress
I did a test run of my two-color Cardinal. With a item like this, the point of focus is going to be on the top, so when I slice in Simplify3d, I give some scrutiny to the my top level (As opposed to say a 3D scan of a person– there the top of the object isn’t the center of focus). I noted with my cardinal there was an oddity in the top.

Even though that section was going to be all red, I didn’t want that odd texture in the mix. I wanted a nice, smooth surface for viewing pleasure. I’ve seen this issue before and I knew what I was up against– I didn’t have a completely flat surface where I wanted one.

I opened my modeling software back up (Blender) and the issue was I had a number of vertices that weren’t exactly the same as the others of that level. In the example below -0.00933 instead of 0. This caused the surface to not be exactly flat and when it came to slicing time, the printer has to translate that into layers. To adjust for the non-flat surface, part of the cardinal’s chest did not go as high as everything else. 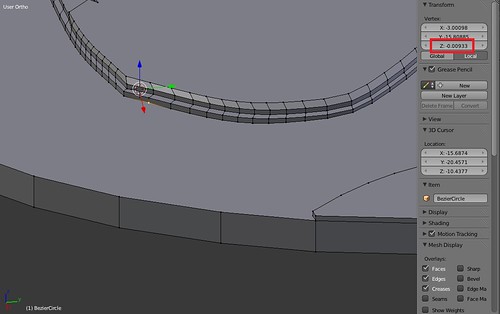 I adjusted my vertices to make them exact and make a nice flat surface. When I sliced again you can see the difference. 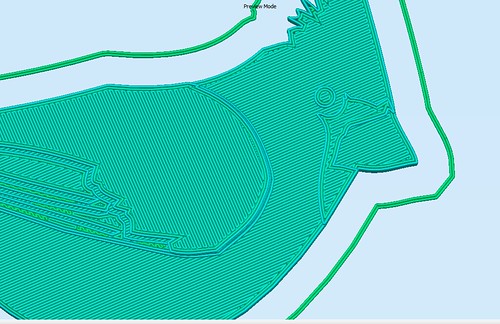 My test print is coming along. The cardinal is cute, though this doesn’t represent my vision. He’s supposed to have red on his wing with just snippets of black poking through. I had a lapse of concentration during the last filament change to red and ended up mucking up the exchange by going the wrong way on the Z axis. 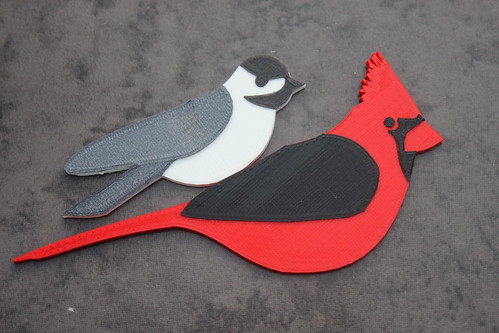 The Chickadee and His Friend

Live and learn! Tomorrow is another day and another print. : )

Today in my printing adventures. Most of my endeavors were focused on printing multiple colors on the single extruder machine.

Victory Pictures of VT Logo
My first practice run was right before the July 4th holiday, I made a quick VT medallion in OpenSCAD using GlennLo’s awesome Virginia Tech Logo model. A couple of my Facebook friends commented positively on the item so I mailed a few out over the weekend.

Today, my friends were kind enough to post pictures of their new arrivals. It made me smile to see. 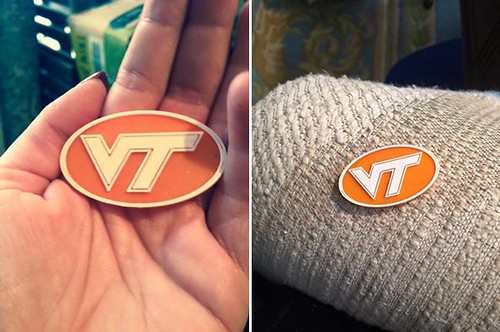 Modelling a Cardinal
Another multi color project I took on was making myself a chickadee. It was simple and cute and I’m smitten with it (I do have a version with legs that I printed last Thursday).

My Chickadee– Three Colors on the MakerGear M2

I decided I need some other birds to keep it company. I have aspirations of making a variety of species and maybe making a wreath. Over the weekend, I went through my Mom’s bird book and I have a bunch I’m eyeing. Since last week, I just got a shipment from PrintedSolid of new filament and one of the colors is Traffic Red, the cardinal seemed like a good option. It’s not the most intricate modeling, so I squeezed a little of bit of Blender work in here and there while the code for my day job compiled.

I’m excited about the wing detail. I’ve carved out some feather detail to show a peek of the black underneath. I think it’s going to look mighty fine. 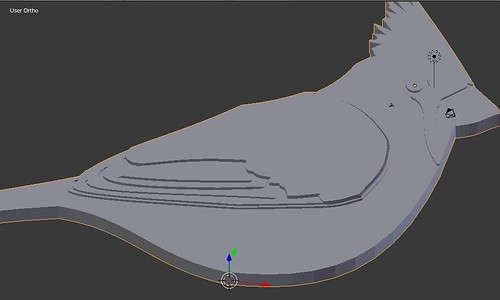