Greetings! I am starting to build up quite a collection of 3D Printed buildings! Today I thought I would give you a little tour of them and my design process and share some of my design guidelines and tips.

I’m from Prince WIlliam County Virginia which is outside of Washington, DC. With the exception one gazebo from New York, all my buildings hail from Prince William County, Virginia and most of those right smack from my town, Occoquan. So far, I have

All of these I modeled in Blender and they all start with one thing.

Reference Images
I go out and take reference images. In the case of my neighbor’s house, the prints were a gift and I needed to exercise stealth, so I actually tromped through the woods to snag some pictures of the back of the house. In the case of the Rockledge Mansion, I emailed the home’s owner which allowed me to open up a dialogue with them and I scored an amazing tour of the outside and the inside on the mansion. 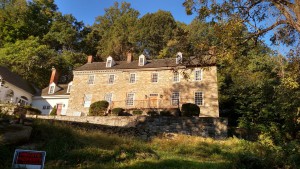 If I needed to supplement my own images, I found Flickr and Google Streetview to be a great resource for finding images of the more famous buildings

And…. there were two cases, where I really needed an aerial view to really get a good grasp of the building. The National Museum of the United States Marine Corps is a great example of that. I had all these side images and I just still could not figure out the geometry of the building. Something wasn’t right. Google Earth to the rescue! The aerial image was the missing piece I needed and suddenly everything clicked together.

Base Model
Blender does have the ability where I can create what’s called an Empty and import in an image. I can rotate these, scale them, make them translucent, so it is very helpful for me as I’m trying to get the proportions of my base shapes right.

Detailing
With the detailing, I have done it a very formal way where my windows and my doors are actually a part of the base model. I used a tool called Loop Cut and Slide to make segments in my house where I’m going to put my windows and doors and then I extrude and subdivide accordingly. What I’ve decided I preferred is do model these details as separate objects. I’ll have Window Model, a Door Model, a Light model, A Railing model. I rather enjoy how easy it is to copy and paste that way.

Tip – When you are doing separate models with your detailing (and you aren’t going to do formal Boolean Unions in Blender), you want to make sure they are exactly flush with the base house. At least in Simplify 3D, if there is overlap, Simplify 3D will leave gaps between the two objects– whereas if you have them lined up exactly, you can be super lazy in Blender and Simplify 3D will recognize them as objects that should be one and slice accordingly.

Detailing Design Guidelines
With my detailing, I tend to keep them 0.3mm – 0.5mm high. With my 0.35mm and 0.40mm nozzles, those “90 degree overhangs” have no trouble on my printers, don’t need supports and still render very well in the final print.

Detailing Tour – Windows
Like most things the window detailing is about 0.3mm – 0.5mm high. In my neighbor’s house, for example, the panes are 0.4mm high and then the shutters are another 0.1mm above that. 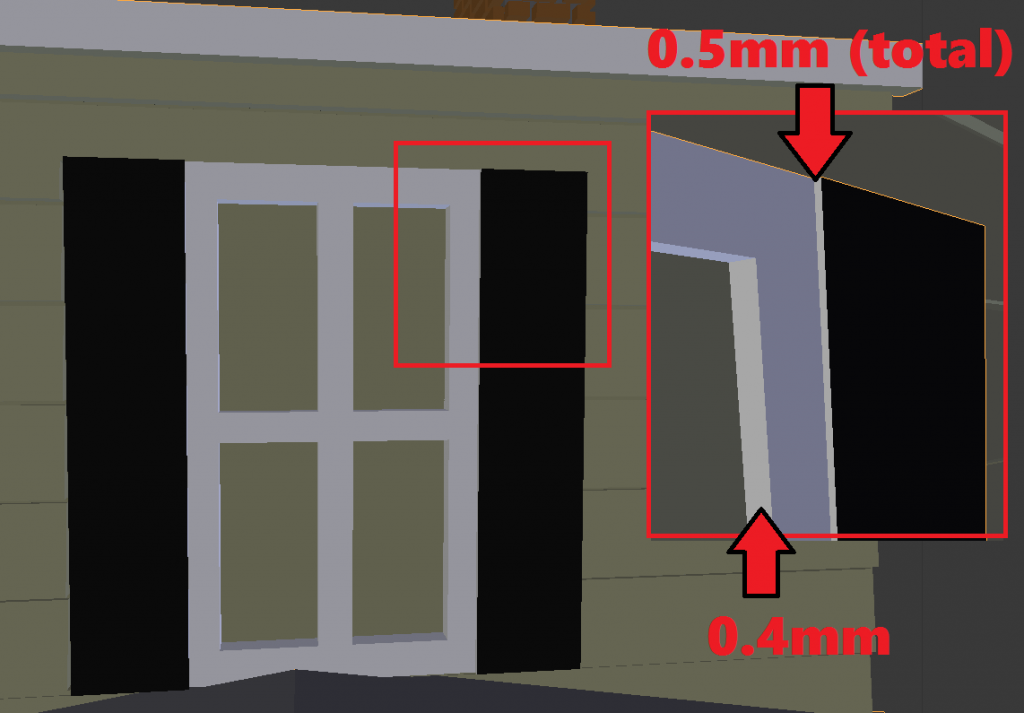 Tip – Slice as you go
When I’m working with small details and I want to make sure they translate, one thing I do is slice as I go. A perfect example of this is window panes. My Mill House Museum, the windows came out fine on a Shapeways fancy Sand Stone Printer. When I went and printed it on my FFF printer, I noted the vertical panes were too thin so the printer didn’t bother with them. In subsequent models, I’ll preslice sections to see how it is going to look on my intended printer.

If you don’t slice as you go and you find some missing details, there are options. In Simplify3D, you can try to adjust Horizontal Size Compensation (It’s under the Other tab) to get a better slice. 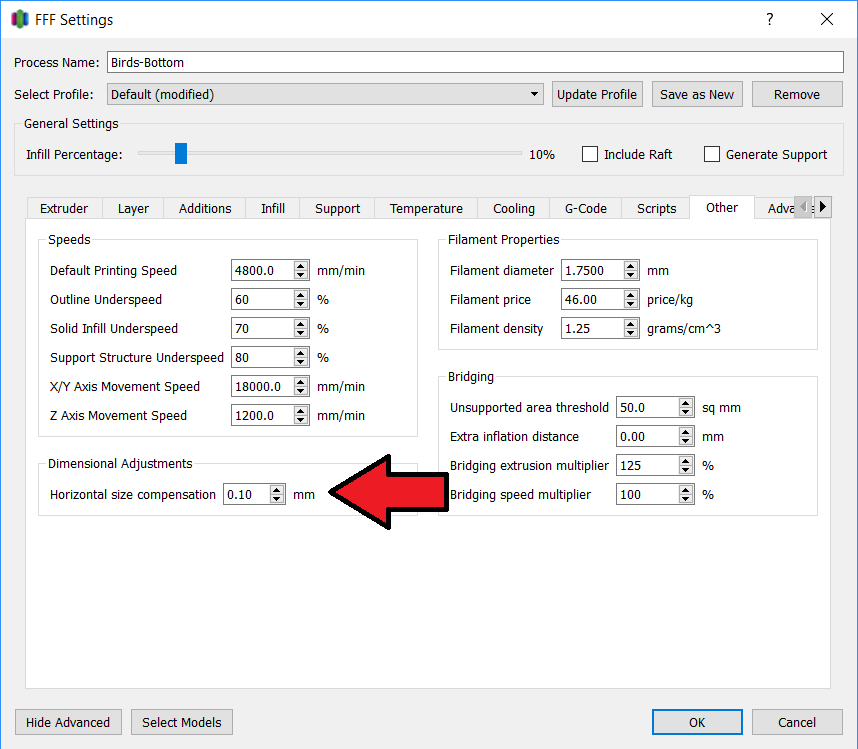 Detailing Tour – Outdoor Lights, Bay Windows, Garage Overhangs
I modeled the light, but there was deviation from real life— if you look at it from the side, I taper the bottom up– I give it a nice 45 degree angle to help with the overhangs. I did the same thing with the Bay Window and also you’ll see a small triangular wedge between the car port and a screened in porch. This is just to give the printer some solid overhangs to work with. 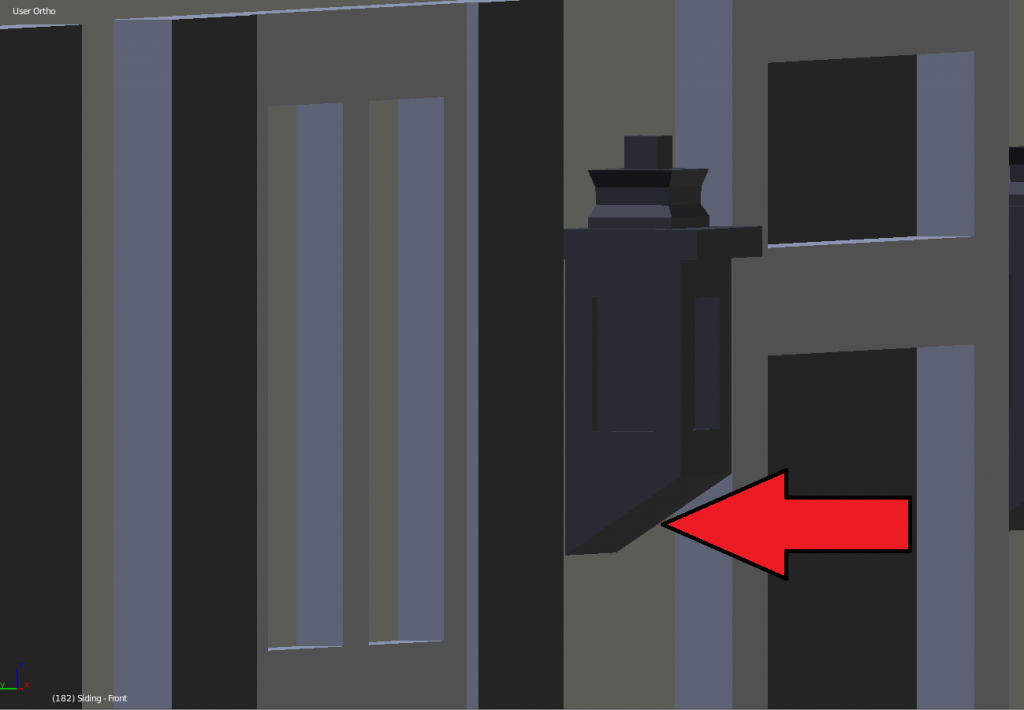 Detailing Tour – Railings
The biggest trick to the railings is coming up with the dimensions with the slats. I didn’t want something too delicate. I have found 0.65 – 0.85mm to work. 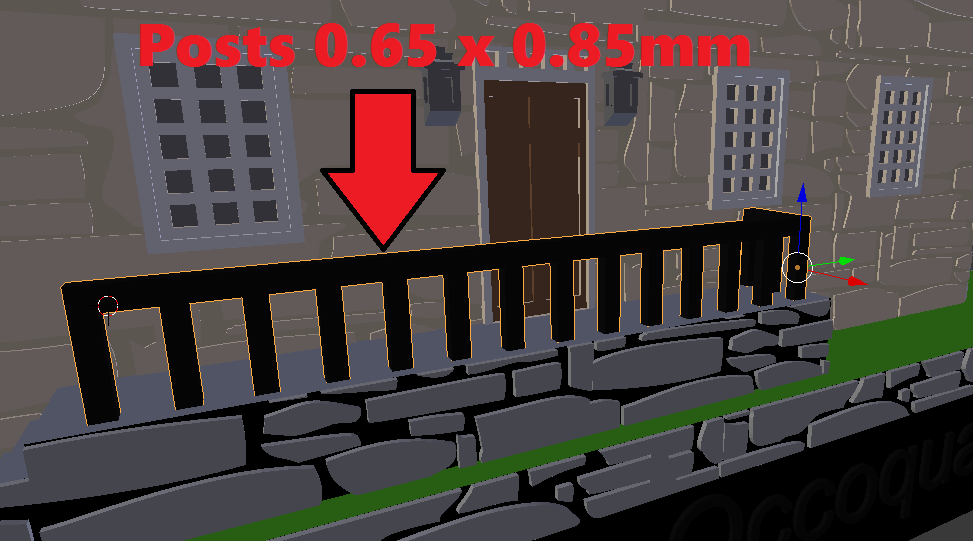 And I reused through measurements on my neighbor’s house. I just got and pasted to get their detailing for their screened in porches. 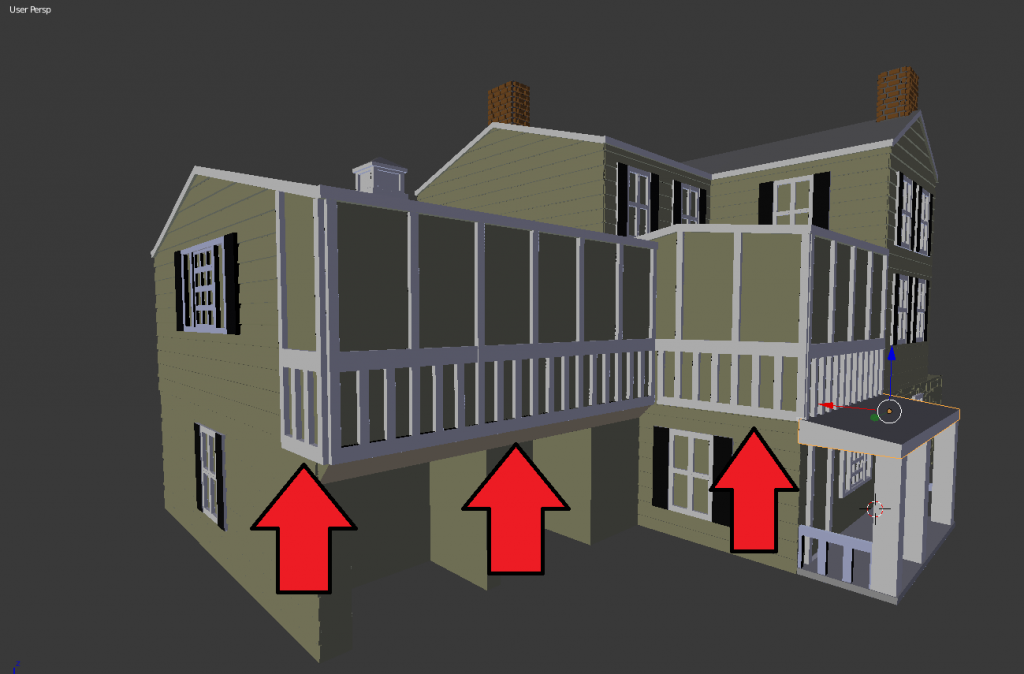 Detailing Tour – Supporting Posts
When I got to my neighbor’s house, I had some posts that would be supporting an awning. I went ahead and increased that to be over 2mm thick on each side so there was more strength and stability. 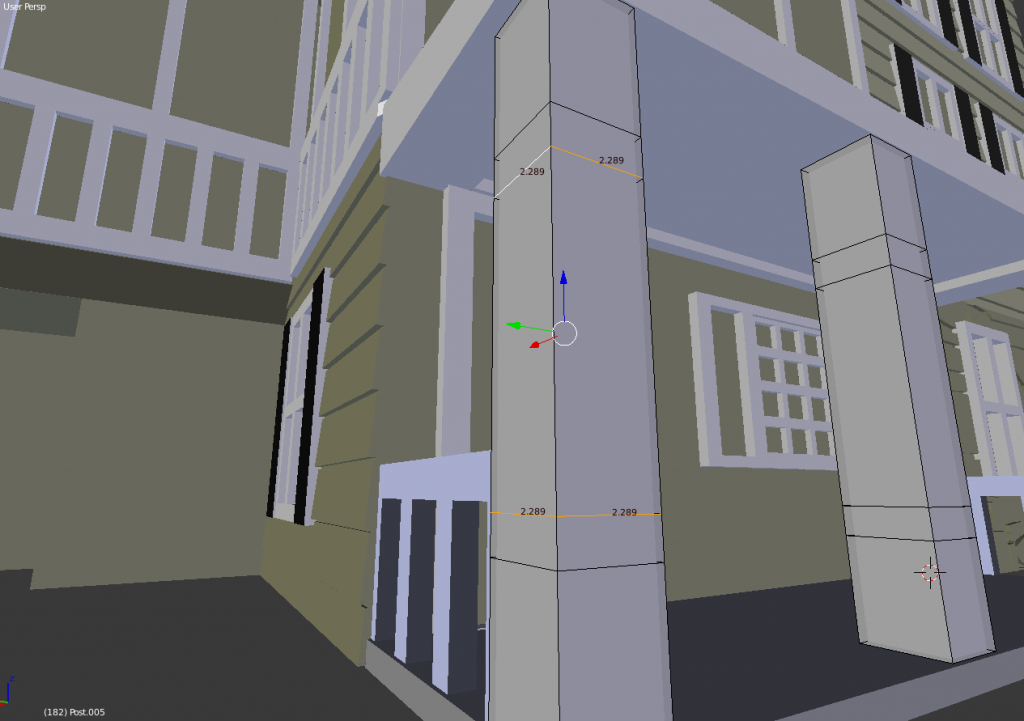 Detailing Tour – Awning Hack
And with the awnings, I wanted to print those without supports. What I ended up doing there is I had two small layers connecting the main house with the posts. My very own support beams. They were just 0.5mm high which meant my printer would print two layers for it. Then, the rest of the awning came in and bridging settings kicked with ample parts to “bridge to” 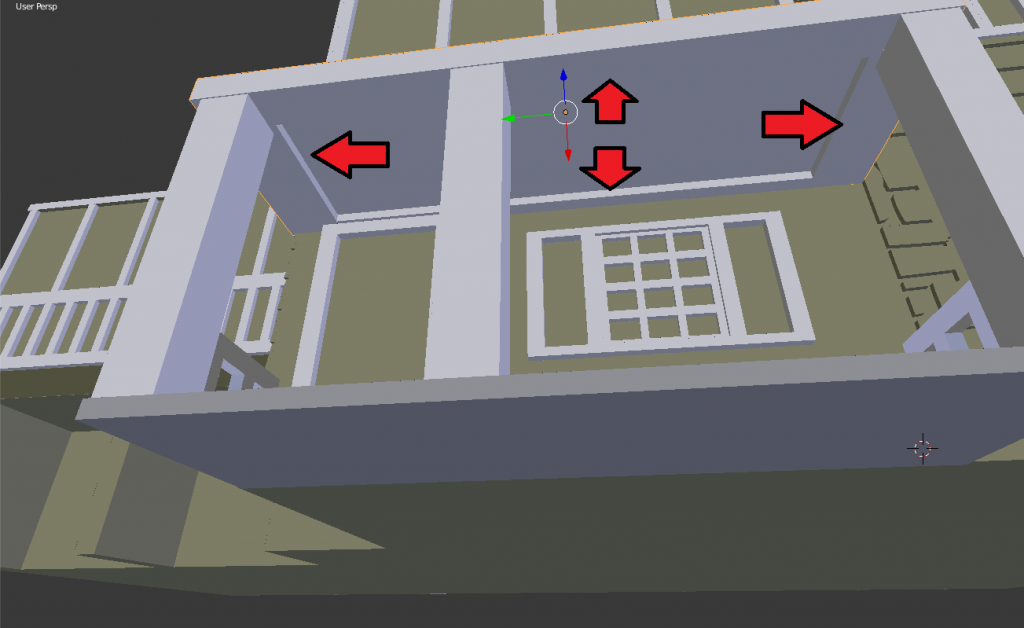 Textures
There are other approaches you can do with textures. You can, for example, use a grey scale texture map and use the Distortion modifier. I have found that to be a little intensive on my machine resources and making it difficult to continue to the tweak the model.

I do have a few “textures” I add to these models — stonework, brickwork, shingles, and finally siding. These I believe are mostly 0.3mm high. The Stonework I did slightly as purist. I actually used Bezier Curves to trace out real stones from one of the historic buildings in my town (Note– there are many ways to skin this cat). For bricks, siding, and shingles, I modeled one piece and then used the Array Feature in Blender to make an entire sheet.

Remember with the Spinning Pokestop, I talked about the Power of Intersection? This is an example of that. By Duplicating key vertices and separating them, I would make a template of the part of the model I wanted texture for. Let’s take the front of my Rockledge Mansion. I wouldn’t want Stonework where the windows and doors were. So I make an object of just want I want textured. 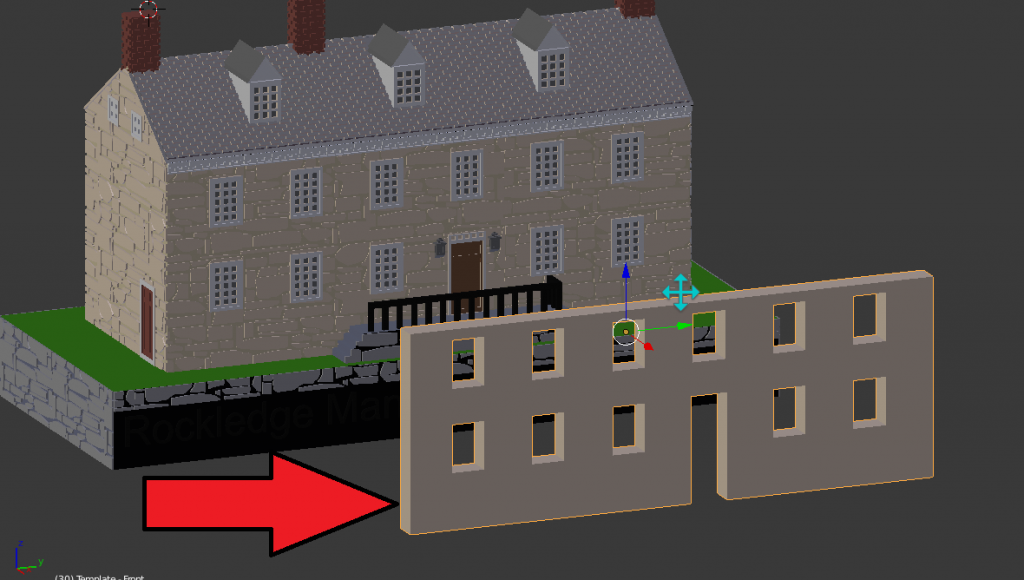 I put my textured piece, in this case, the Stonework in the middle of it and then I take an Intersetion. Viola! Texture. 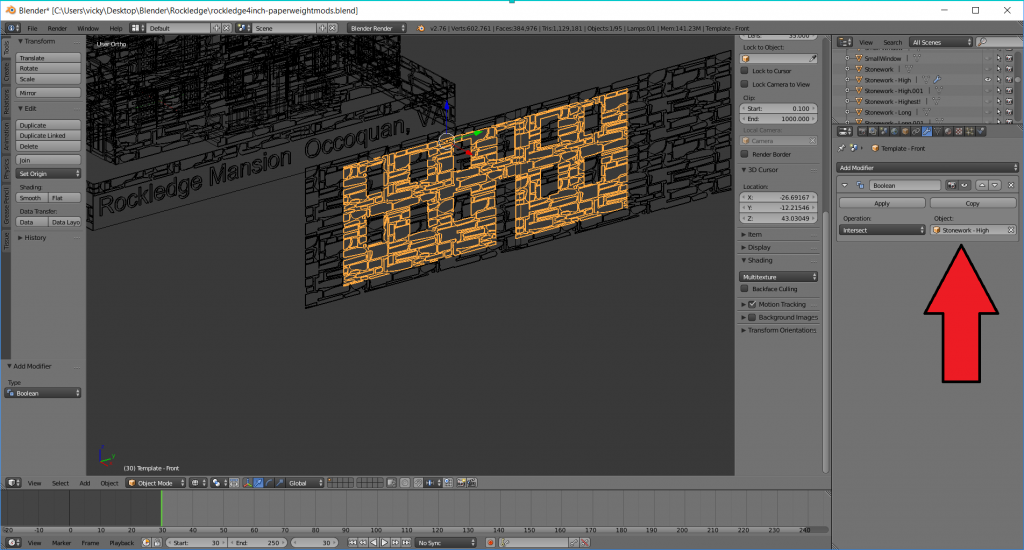 And just like my other details, I make sure that is flush exactly with my base model, so it slices nice and fine in Simplify 3D.

Hack – Use Layer Lines To Your Advantage
I had been doing shingles for everything… until my very last model, my Neighbor’s House. I was doing a “Slice As You Go” and I noticed, the natural layer lines looked remarkably like shingles, so I rolled with it. 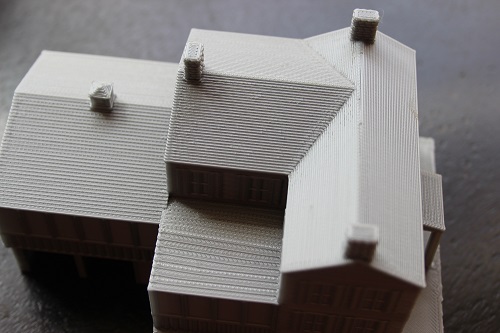 2 thoughts on “Tour of my 3D Printed Houses”