One of my favorite new channels is Clare from Make It And Fake It. I love her courage to fail and her humorous delivery sits very well with me. Today I went to catch up with her latest episode and was delighted and surprised to see her mention me. In this video, she works on embedding rice with Cura to make an Egg Shaker. Enjoy!

One thing I find absolutely invigorating– helping people out in the community. After my Simplify3D Print of the Week, Twitter user @TomLum1 reached out with some questions. Look how quickly he mastered and applied his new knowledge! Lovely!

Aww, my Etsy Shop snuck into Abuzz Design’s Mailbox Monday Livestream last night.  I love seeing the growing presence of 3D Printing on Etsy.  My shop is just one that Lauren covers (all the links stolen from Lauren’s video description are below).  Be sure to check out and, if possible, support my fellow creators!

A big thanks to Lauren for always being such a supportive member of our great community!  Definitely check out Lauren’s shop at http://etsy.me/2raDpGy

Well now, that was a surprise.  I started getting some unexpected Twitter and Facebook notifications.  I was surprised to find I was highlighted by Simplify3D for their Print of the Week.

This week's Print of the Week goes to user @TGAW for this huge multicolor print using a single extruder and multiple processes! #S3DPOTW pic.twitter.com/fiSdN3IwtZ

This five color print is for a friend in Crookston, Minnesota.  I, of course, use my beloved Simplify3D Multiple Processes.  I believe it is my largest multi-colored print– it took up the whole bed of the MakerGear M2.

I’m glad Simplify3D enjoyed the print.  I hope my friend does as well!!! 🙂

One thing I absolutely love about having a Maker Coin celebrating failures is people feel comfortable and free to share their mishaps and failures making the coin. Thingiverse user Waldamore brought me absolute delight this morning with this Make.

I have had nozzle offset mishaps too. : ) 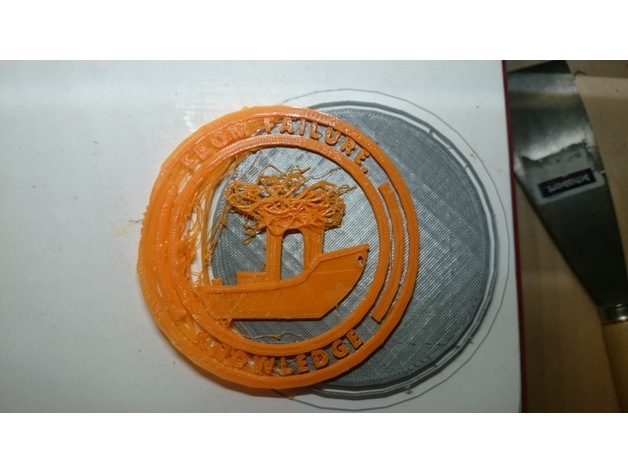 One of the things that gives Blender its reputation of having a large learning curve is it is geared towards animation. It has a lot of extra features or capabilities we don’t use for 3D Printing.

Homesick for the Appalachian Trail, I embarked on making rhododendron themed drawer pulls. It was a Blender animation feature helped me pull off my vision. I had never heard of “Particle Systems” before and with good cause. They are typically used for animating dust, smoke, water, and hair. Thanks to a wonderful tutorial video by Blender Facile, I learned how I could also use this feature to convert a single flower model into the trademark ball of flowers for the rhododendron.

My steps for using the Particular System were:

Eureka!  I had my ball of flowers!  My modeling journey was far from over, but the hardest part about that journey was done, thanks to an animation feature I never thought I would need.

This afternoon I had the delight of joining some of the female YouTube 3D Printing Creators for our very first Lady Livestream.

We all had a blast and hope to do it again next month.  In the meantime, you can catch the inaugural episode on Clare’s Make It & Fake It Channel at https://youtu.be/1Csy_5cv9Fs

I had some Internet woes, but I did join some of the community members for this week’s 3D Printing Friday Night Community Hangout.  This week, we were on Zidim’s 3D Printed Trains Channel.  The topic was “Myths of 3D Printing”.

You can watch this episode at https://www.youtube.com/watch?v=p747ClxAdw8

By request for a community member, there is now an English version of the “From Failure Comes Knowledge” Maker Coin.  That version is “maker-coin-english.stl” in the files section on Thingiverse.