Not a project or video of mine, but I just love this example of an embedded object by RJ Make. He shows us how to extra Magnetron Tubes and then uses Simplify 3D to embed it in a print.

RJ uses a different Simplify 3D technique than I do. I tend to rely on Multiple Processes with custom Starting and Ending Scripts. RJ takes advantage of another section of that Scripts tab. In the Additional terminal commands for post processing, you can set up special code that runs against the G-Code Simplify3D makes to print your object.

If you pull up your G-Codeinto a text editor like Notepad, you can see that each layer is prefixed with a comment in the G-Code.  In the screenshot below, the text “; layer 15,” indicates the very start of my Layer #15.

This gives you a nice place mark and opportunity to do a search and  replace . You use \n for your Carriage Returns. Other than that, everything is normal G-Code.

In RJ’s case, he told Simplify 3D to find the spot in his gCode where Layer 54 is about to begin and he replaced it with: 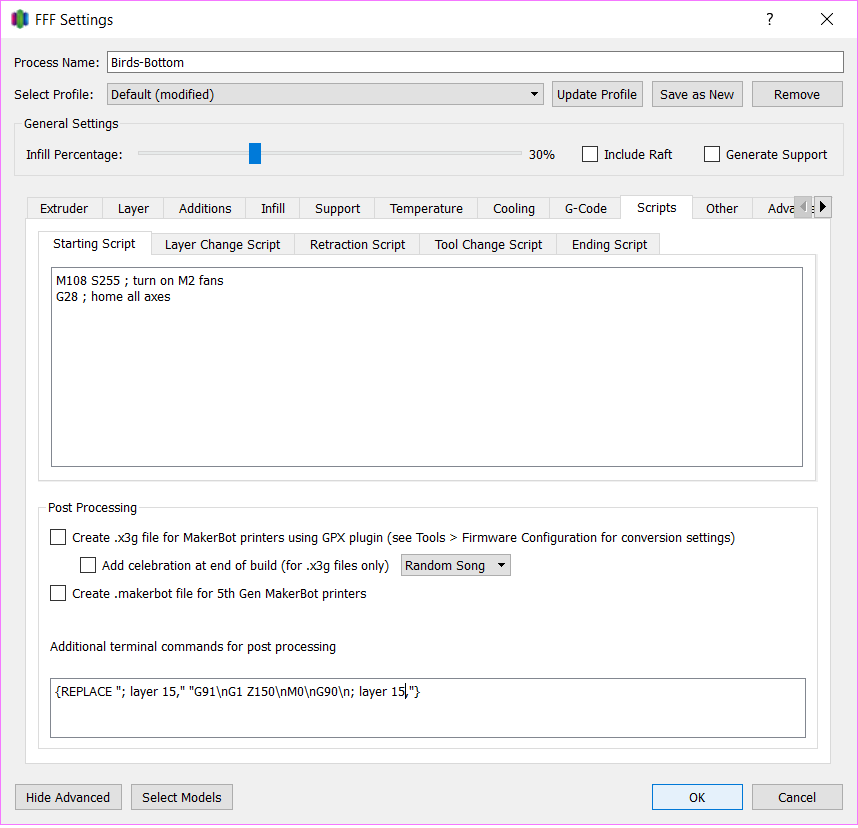 Simplify 3D compiled the G-Code and ran the Search and Replace, so the additional commands were at the very right spot, right before my Layer 15.

One thing that intrigues me about this technique is what I call my “sealing” layers, the layers that will be sealing my object in.  Often these are the very first layer of a brand new process, so they are picking up my First Layer Settings (which I do adjust accordingly).  When you use this technique, the sealing layer would be picking up the bridging settings.

I look forward to giving RJ’s technique a try!

Wanna Learn More?
Documentation on this Simplify3D Feature can be found at: Tip of the Day 8 – Scripts Tab, G-Code

Ha! I have had not one but TWO YouTube commenters point out that my Spool Holder on the Wanhao was backwards. I did a Google Image search and sure enough– it appeared I was the only person in the entire world that had mine pointing towards the outside of the machine. 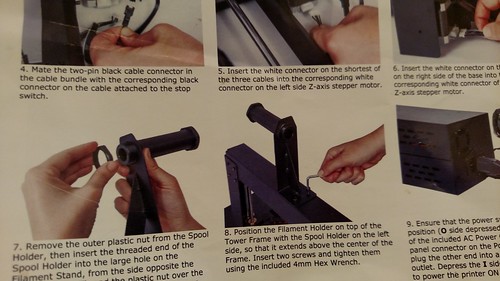 But when my husband looked at the picture, he saw it differently. It’s the angle of the image. It is pointing to “outside” of the machine— but the other side. So it is still pointing to the center like the rest of the Wanhao User Base.

When I decided the Wanhao was going to be accompanying me to the Maker Faire Nova, I decided it was time to make a correction. First thing in the morning, I got out an allen wrench and made the switch.

I am now assimilated! 🙂

Technically Delaware did an article on my favorite filament provider, Printed Solid. Who show up right smack in the middle of the article (for very little reason)– ME! Muahaha!

Give the article a read when you get a chance, or better yet, order some exotic filament from Printed Solid.  😉

The last full printing day before Maker Faire Nova, I went to start a print on the Wanhao and the whole machine shut down.  The LCD Panel went black, the steppers turned off, the works.

I turned the machine off and on and tried again– same result.

I turned the machine off and on and then went to Quick Settings->Preheat PLA— same result, the machine died.

I figured the worse, but I did a quick Google search and the very first link I pulled up was a discussion on Thingiverse about how the motherboard can’t always handle the load of the heated bed.

Hmm….  Worth an experiment.

I turned the machine back on and I tried just heating up the Extruder.  The machine kept running.

Well if the 3D Printing Dieties were trying to stop me from printing on that Wanhao, there is something they don’t know:

The things I wanted to print didn’t need a heated bed, so I resliced with no heat and the show went on! 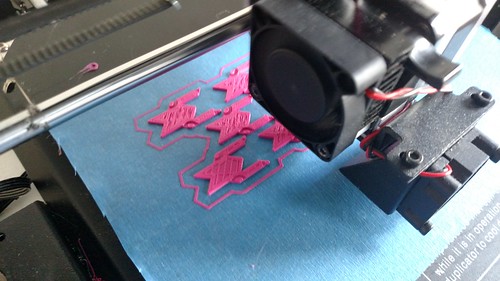 My very second Live Stream was a doozy.  Hosted by Travis and Heather over at A Pyro Design on the eve of my birthday, we maxed out the Google Hangout.  It was a treat to join the other makers and give them an update on the projects I was working on for MakerFaireNova.

I was listening to an episode of the WTFFF 3D Printing Podcast that caught my eye entitled, WTFFF 451: Closing The 3D Print Gender Gap. At the very, I got to hear an update on myself and my projects.

Thanks to the 3DStartPoint and Tom and Tracy for the shout out.

At the time of publishing this video, I have about 8 days left until Maker Faire Nova on March 19, 2017. More information about the event and tickets can be purchased at http://nova.makerfaire.com/

For my third time participating, I am focusing on 3D prints with embedded elements. With the help of my MakerGear M2, the Wanhao Duplicator i3, and my ever trusty Simplify3D, here’s what I got brewing:

*I may have attached it differently had I seen Joel Telling’s 200mm bridge first over at 3D Printing Nerd https://www.youtube.com/watch?v=nL0nWJ__PNM : )

*The mirrored vase can also be seen on A Pyro Design’s channel at https://www.youtube.com/watch?v=-IL3q7-osqE

Yikes guys.  I’m starting to do some Live Streams!  This week, I joined Lauren from Abuzz Designs and Matt from How I Do It for a little hangout.  We discussed selling 3D Prints on Etsy and Shapeways.

Watch the full episode below on Matt’s How I Do It channel.