Phew. Did some catch up on my Etsy site and got a bunch more products listed this week including:

The le FabShop’s Wolverine Claws were making the rounds on the Internet and they looked amazing, but I did not feel compelled to print them. My husband saw them and instantly wanted some… but still I hadn’t quite worked it into my 3D Printing schedule. And then…. The 3D Printed Nerd nonchalantly mentioned in a VLOG that he printed them.

Suddenly I was swayed. And I already have grey filament in my printer from the Fun Police Sheriff’s Badge. It was destiny. So I went ahead and gave it a whirl. This was before The 3D Printing Nerd’s full video on the claws, so I was still blissfully unaware it took 3 tries to get them right. That might have deterred me, but luckily I didn’t see the video yet and luckier, my first print was a huge success.

I printed at 0.25mm layers with 10% infill. The Thingiverse instructions recommend rafts. I forgot to turn rafts on in Simplify3D, BUT knowing the brutal overhang was coming, I did glue stick the absolute heck out of my bed. That was sufficient to keep the claws stuck on the bed. I did have a minor first layer issue, so the very first layer of one of the claws was fused together in my print. I freed that up with Exacto Knife and SHEBAM. We were in business.

Sadly, my husband STILL doesn’t have the wolverine claws he desires. My four year old took one look at those things and yeah, now they are his. : )

Well I *thought* I was printing the Le FabShop Wolverine Claws for my husband, but it's been adopted by my 4yo. #3DPrinting #Xmen http://www.thingiverse.com/thing:1093632 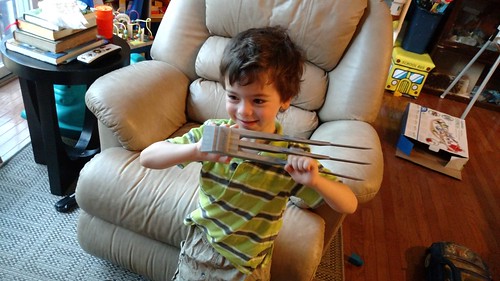 It is such an amazing and impressive design. Many thanks to le FabShop for sharing their design!

A friend of my brother’s passed away last week. He was in his thirties, so it was an unexpected death. Last night, my sister-in-law texted to see how soon I could 3D Print something for the funeral. She wanted a Sheriff’s Badge with one request– that it simply read “Fun Police”.

Thanks to Thingiverse, OpenSCAD, and Simplify3D, I was able to turn around her request fast.

Thingiverse and OpenSCAD
Thingiverse had a lot of Sheriff Badges to choose from. I went with the design by Bichiatari. I liked the standard six star approach and bonus– it was in OpenSCAD, which I taught a class on last June! I used his base code to make some slight alterations: 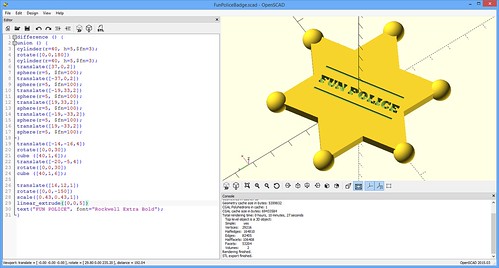 Simplify3D
Now, when I was done, the points of my stars did extend below the base of the star thanks to the spheres. 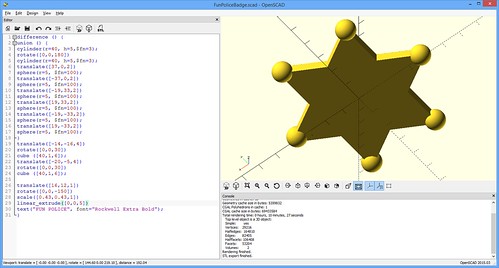 I didn’t want to print those sphere bottoms

For my first trial run, I didn’t go to the trouble of making that flat in OpenSCAD. I just flattened the bottom when I sliced in Simplify3D. I simply changed the Z offset, so the bottom part of those spheres were below my build plate, so those parts wouldn’t print. A nice handy trick.

I also felt the proportions were a little off, so I scaled just the height of the object down so it was only 6mm high. 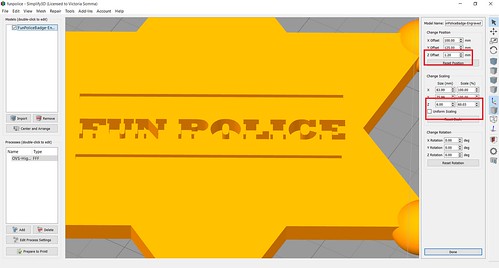 Hack with Simplify3D – Changed my Offset To Lower the Object Down

Rev 2
The first print was okay— and I bet they would have been satisfied with it. I didn’t like how the “E” at the end of “POLICE” printed out and I thought it would be a better use of real estate to make the letters bigger. 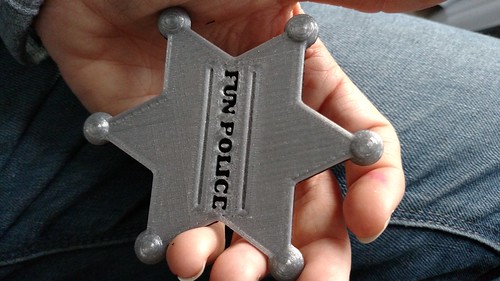 The First Print Had a Messed Up E

So I went back into OpenSCAD and made some changes:

For those interested in the code, the full OpenSCAD code is below.

As far as the second print— I liked it much better. I used the MakerGear Silver PLA filament. 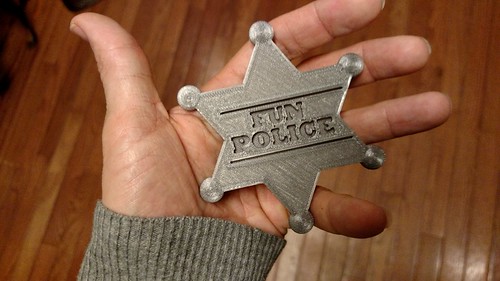